After one week of working full-time as a labor and delivery nurse, I’ve decided I hate working.

In one week, since I signed on to work, we’ve had one kid go through surgery, one kid land in the ER, too many pizza deliveries to count, countless tears and tantrums during the early-morning sitter drop-off, and my personal best friend, that bone-tired exhaustion that leaves you waking up in your toddler’s bed at 1:00 in the morning, wondering how the heck you fell asleep again during the ever-riveting “Goodnight Moon.”

But it’s just so much harder now, working during “normal” hours. Arranging childcare every day is exhausting in itself. One day, my sister-in-law watches the girls, but she has to leave at 2:30, and Ben doesn’t get home until 4 pm, so I have to find someone to watch them for an hour-and-a-half, which sometimes my young sister does, if only she will text me back to answer me. If not, we are schlepping them out the door to their aunt’s in-home daycare a half hour away. Thank god she is family, or I would completely lose my mind.

Ada doesn’t like going to the babysitter. She cries and cries, and has even told us that some of the girls are mean to her. Every night, she is now in the habit of asking us, her little voice cracking a little–“Mama, where will we go in the morning?”

I am so grateful to my sister-in-law for coming over when she can to watch them, because I know they love her and that’s considered a “fun” break from me, but it’s still hard. It’s just such a long day when I’m gone from 6:30 AM until 8 PM.

Like yesterday, when I got this text around noon:

It was the smiley face that got me. That little emoticon threw me into a full-blown panic. Who texts a smiley face unless something is gravely wrong?? Keeping my fear out of my voice, I called my sister-in-law from the hospital and found out that Mya had fallen at the park and couldn’t walk.

I guess I should be grateful I work at a hospital, because the rest of the afternoon (after timidly asking my manager if I could leave…on my 4th day of working, I’m sure she’s very impressed…) was spent chillin’ in ER and watching Mya eat her weight in suckers while a strange, lanky male doctor with a ponytail eventually told me nothing was wrong.

She still can’t walk and I’m scheduled to work on Monday and Tuesday.

What’s a working mom to do? 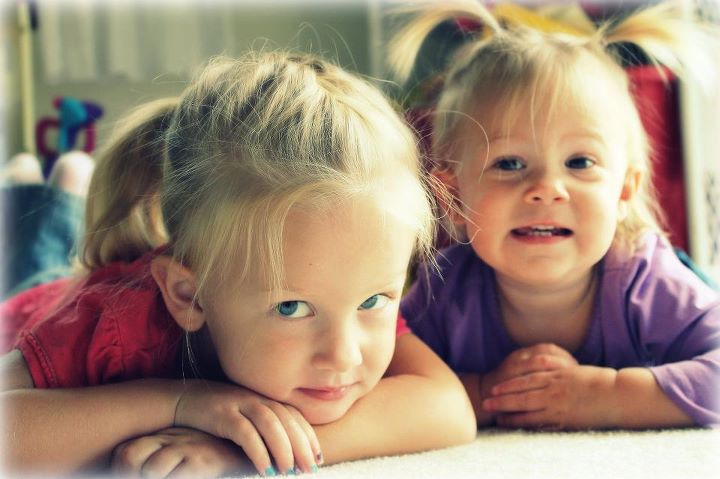 How can I leave these faces?? (photo by Lauren Brusie)