This past weekend, we celebrated a marriage–Ben’s brother married his beautiful bride, Lauren, in their small-town hometown.  Ada made her big debut as flower girl, so naturally the day was more important for me then it was for Lauren. Unfortunately and unlike Lauren, Ada burst into tears at the end of the aisle and refused to walk down, forcing me to do the strange I’m-in-heels-and-I-don’t-want-to-be-noticed sprint to fetch her. 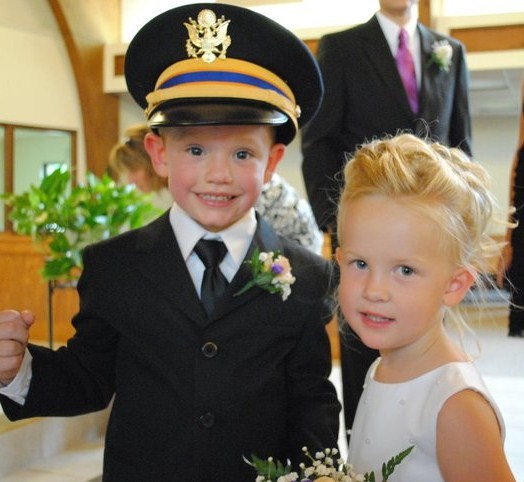 My beautiful flower girl and her gentlemen friend

As mother-of-the-flower girl, I enjoyed access to the “bridal room,” taking part in the pre-wedding preparations, fetching various forgotten items (hellooo, John Deere garter!!)  and faithfully guarding the door so no one would catch a premature glimpse of the bride.  As I watched Lauren’s bridesmaids help her into her dress and embark on the thirty-minute task of lacing her up, it was hard not to be envious.

This wedding was the way weddings are supposed to be.

For those of you who don’t know the story behind my blog, here’s the deal: I had an unplanned pregnancy my senior year of college, at the ripe old age of 21.  Obviously, it was a difficult situation, and I’m sure I’ll dedicate a post to that down the road sometime, but for now, all you need to know is that for me, the hardest part about an unplanned pregnancy was losing the life I thought I had.

I’ve always been a planner; one of those people who love the checklists and writes completed ‘to-dos’ just to be able to cross them off.  In high school, I prided myself on my accomplishments, not for the accomplishments themselves, but for the fact that I would set a goal, and then reach it.  I set a goal of being valedictorian and getting a full-tuition scholarship to college: check. Studying abroad in France: check.  Getting into nursing school a year early: check.  Landing an awesome internship in D.C. before senior year: check.  Getting my own apartment: check.

Heading into senior year, my goals were quite simple: have an awesome and easy senior year, at last switch my major to writing, my life-long dream, finally enjoy a few drinks with my newly-updated license, and, the most important piece of my plan: get engaged. I pictured a lovely year-long engagement, landing my dream job, saving up all summer, and getting married in the crisp, cool air of fall, my favorite season. My life “plan” was going quite nicely. I had no doubt that all of my dreams would come true.

But then, the plan changed a bit.

Four weeks into my senior year, I took a pregnancy test and my world shattered. Plans? What plans?  The only thing I had to plan was howintheheckshouldItellmyparentswhatIhavedone?

When I found out I was pregnant, I felt like a failure.

I had failed in so many ways.  For starters, I had failed myself and my relationship–Ben and I had actually wanted to wait until we were married to have sex.  When we didn’t, I was disgusted with myself. I knew I ruined something that could have been special.  The guilt that came after was overwhelming.  When I found out I was pregnant, I felt like I had failed my unborn baby–what a way to start off his or her life–out of wedlock, bringing her in to the world too early, with a mom who was still a kid. I felt like I had failed as the mother I had always wanted to be–there was no excited huddling over the pregnancy test as we waited for the results, no cries of joy and tearful spinning around the kitchen.  There was only silence–and sobbing, complete and utter devastation.  My first day as a mom–and I didn’t even feel a speck of love for this baby. Then there was the utter failure in my life plan–no easy senior year, no switching majors to become a writer. And there would definitely be no drinks.

But as for the getting engaged part?

Be careful what you wish for.

Ben, bless his heart, did try.  But a spontaneous day trip to Mackinaw Island can only really mean one thing.  And then there was the strange clutching and panicked pocket checks that occurred periodically during the day. The engagement itself was a picture-perfect moment, with the sun bursting through the drizzled clouds at the exact moment Ben dropped to his knee.

So we got engaged.

And then had to decide when to get married.  As you can imagine, our family members had lots to say on the matter.  On his side, no question: We must get married ASAP.  On my side, my mother encouraged me to take the time I needed to be sure, to realize that you only get one wedding.

Isn’t there some saying that mother knows best? I should have listened…

I was torn in my decision.  On one hand, I really wanted to become a wife before I was a mother. I didn’t want to deal with explaining away my empty ring finger, or have a discussion about last names at the hospital, or have my pediatrician judging me.  I wanted to bring the baby home to a family.  On the other hand, I wanted my day.  I wanted to feel like a bride–pretty and pampered and enjoy a honeymoon with my husband.

We were in school at the time, with my due date in mid-May, my college graduation in early May, and Ben’s the following December. We decided the easiest, most practical solution would be to get married over that Christmas break, before I was too big, and so we would plenty of time to get settled before the baby.

I tried to convince myself that it would be ok.  That the wedding was about a marriage, our love, and that it didn’t matter if I was pregnant.

But who am I kidding? It mattered.

Instead of throwing myself into the wedding planning I had always dreamed about, I laid on the couch, too exhausted and nauseous to move, with my mom on speaker phone, deciding on details.  I puked in the parking lot before I went dress shopping and bought the first dress I tried on because I was too tired to think about trying on more.  I didn’t have a bridal shower or a bachelorette party. I had a seamstress on speed-dial (which came in handy when, predictably, during my final dress fitting on the eve of my wedding, my dress tore completely down the side).

And when I walked down the aisle in front of 500+ people, no one craned their necks to look at the beautiful dress or the blushing bride.  They looked to see if I was starting to show.

I didn’t feel pretty on my wedding day–I felt fat and pregnant.  I didn’t want to make love to my husband on my wedding night, or even during my honeymoon. (what is this myth I hear going around that pregnant women have an increased drive? Give me a break!) And honestly, I feel like I deserved all of it for what I had done.

So when I go to weddings like this one–shockingly perfect, with beautiful bridesmaids, a gown I couldn’t dream up, laughably drunk groomsmen, toasts with just the right mix of humor and grace, and a bride and groom really and truly in love–I have a hard time.

It makes me wonder what could have been for me.  Maybe it’s just a day, or maybe it sets to the tone for your entire marriage.  Maybe it shows you what love can be.