You know what should be an Olympic sport?

Sneaking out of a sleeping child’s room.

Pulling this move off successfully requires more grace than a ballerina, more agility than a gymnast, and more body contorting than the most advance acrobatic. Last night, I caught Ben at the top of the stairs, sitting outside of the girls’ bedroom.

“I was almost out,” he sighed, shaking his head remorsefully. “But one of my ankles creaked and she woke up.”

I nodded in sympathy. “I’m telling you, you have to army crawl out of there. It’s the only way.”

Tilting his head to the side, he considered this, wondering I’m sure, if his wife had lost her mind or had stumbled upon a wise and valuable secret.

About 45 minutes later, Ben’s head appeared at the bottom of our bedroom doorframe. I watched as my poor husband army-crawled his way out of our daughters’ bedroom, across the hallway, and into our room. As he crossed the threshold, he stood up proudly.

How did our lives come to this? Trading secrets and strategies as if we are in the most cunning of wars? Army crawling just to try to get a snatch of sleep?

We have been fighting with Mya in the battle of the bed for a few weeks now. Remember how I said the new reading loft had done the trick in bribing her out of her old room? That didn’t last long.

It started with middle-of-the-night awakenings. She would bolt out of bed, panicked and screaming bloody murder. She was inconsolable. Delirious. Refused to stay in bed, lie down, stop crying. One night, she literally screamed at the top of her lungs, that wracking, on-the-verge-of-vomiting for two and a half hours. Credit goes to my hubs, who super nannied it out with her, quietly putting her back in the bed over and over and over.

Unfortunately, it has only worsened. What was only a middle-of-the-night thing progressed to protesting bedtime all together, and more recently, naptime. She has always been so easy to get down for naps and bedtime, just popping in her crib with a book, not a peep of protest and never waking up at night.

It’s awful now. Last night she was up 5 times, and is now currently sleeping next to my husband in our bed. I have no idea how she got there.

I’ve held out hope that it will get better, simply because the girl is a major creature of habit. She has a slight OCD side to her–one of her favorite things to do is clean and when she plays cards with my mom, she lines up the pile after every turn so not one is out of place. 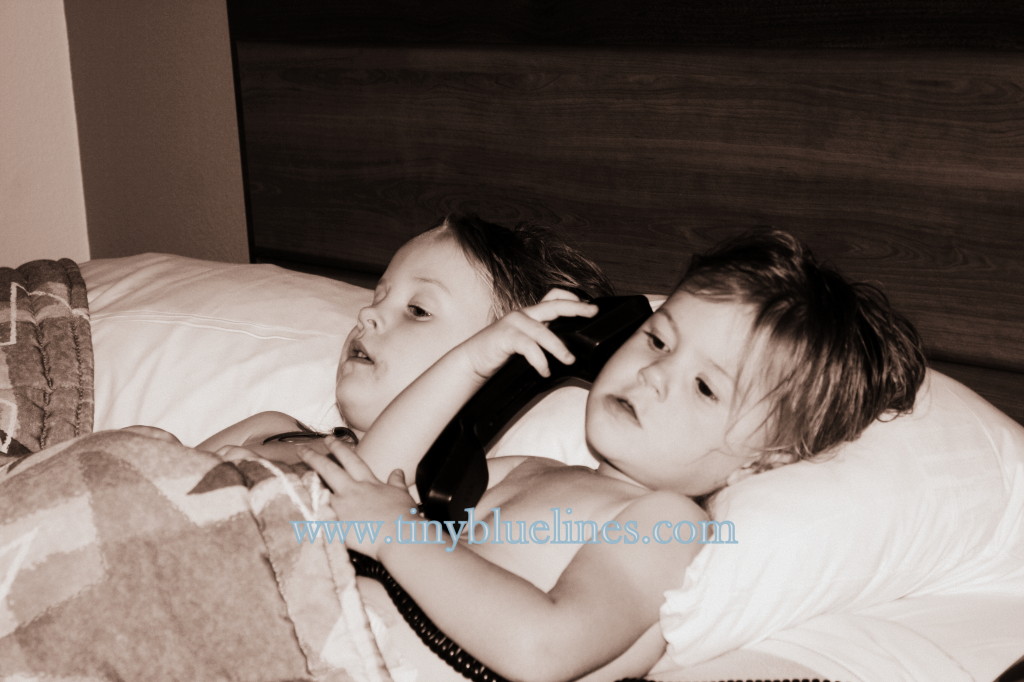 Hello, room service? I’d like to order up another sleepless night for my parents.

So of course, this summer has been an upheaval for her–bringing a new baby home, kicking her out of her safe, warm crib, Daddy being home more. It’s been a lot of changes for a little one who doesn’t like changes. Ada went through a phase at Mya’s age, too, when we struggled with bedtime.

We did the same thing with her that we are *trying* to do with Mya–that slow, steady progression over time out of her room:

And after that, hopefully, they will be used to falling asleep without you again. It took a good month or so before it worked with Ada, so I keep hoping things will get better with Mya.

Right now, though, we are still at that step they don’t really tell you about: The thought may or may not have crossed my mind…