Yesterday I had the luxurious opportunity to get my hair done. All by myself. [Insert gleeful laugh here.]

I went all out. Highlights and a haircut and a malibu, as someone forgot to put salt in the water softener, leaving my already thin locks quite unlustrous.  It was an indulgence, but I won’t lie–the real reason I booked all three was that I wanted a morning all myself to sip coffee and catch up on my gossip magazines.

Along the way, I overheard the hairstylist next to me chatting about kids, her lack thereof, and the way that (omg) some people let their kids scream in public.

She couldn’t believe the way some people let their kids carry on. It’s like, so rude. And then, as the crowning offensive, can you believe that some people actually bring their kids to weddings? Ugh. She would be mortified if that was her.

I took the opportunity to tell her a little story I have about children and weddings.

Once upon a time, I had a friend/co-worker who was planning the wedding o’her dreams. A lovely person and a great coworker, this particular friend was also a slight perfectionist who worked hard to have a successful life and check off her life list. Nothing that many of us haven’t done…until we have children, of course. But alas, she and her fiance enjoyed a childless life, without any small children in the family.

So naturally, she feared having children, and especially babies, at her wedding. They would be loud and noisy and attention-grabbing and it would just be an all-over mess. So, besides the fact that she had several from-out-of-town bridesmaids who had recently given birth, she decided to exclude babies from her wedding, causing a little baby-mama drama.

Being the wise first-time mom that I was, I kept my mouth shut. I couldn’t exactly agree with her when she asked me if she was doing the right thing, but I did fully believe, however, that she did deserve to have the perfect wedding she wanted. It’s just one day, after all.

The day of the wedding dawned and I dutifully arrived sans-child. Imagine my surprise, however, when Ben and I settled in the back pew to find–two bridesmaids and their babies! Eventually, they left the babies in the capable hands of their husbands and the wedding began.

I nervously eyed the babes through the whole Mass. Would they shriek? Would they throw a tantrum? Fill their drawers at the precise moment of silence in the church?

Nope. Much to my disappointment, they babies did not ruin the wedding. They were perfect angels the entire time. (Leading me to wonder how on earth they managed that, as my own personal daughter could never sit through Church without 1) destroying something 2) crying over something 3) pooping through something.)

The babies continued their angelic behavior and the big moment came–the bride and groom stood to exchange vows. As they faced each other, the bride in white and radiant with happiness, the groom, handsome and shy as he held his future wife’s hands–it happened.

Just then, as the bride opened her mouth to repeat her deathless vows, a shrill cellphone ring from the first rows shattered through the entire church, echoing off the walls and piercing ears with a volume-defying pitch.

Morale of the story?

There’s such thing as “perfect.” Life is messy.

But it’s also joyful and beautiful and fun if you can learn to laugh and look past the imperfection. And who better to teach us that lesson than kids?

They happen to not only be joyful and beautiful and fun, but also, pretty messy. 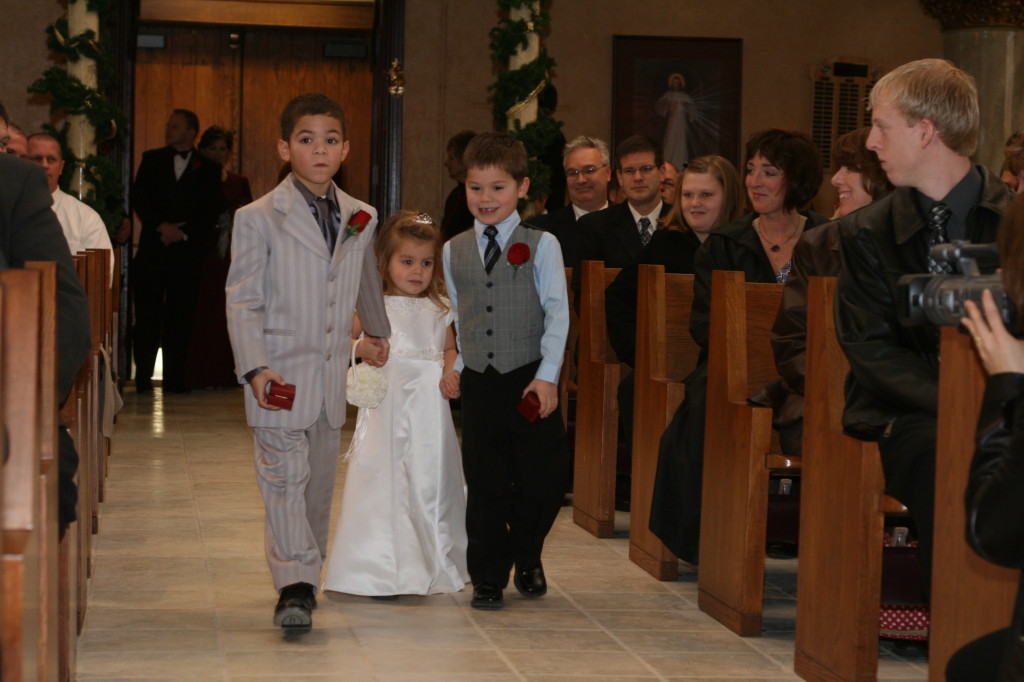 Some cuties from my big day.