After rocking the baby to sleep, I read my three-year-old a story and give her a kiss on the forehead.

“Sweet dreams,” I tell her, tucking her in for her afternoon nap. “Mommy has to go to sleep now.”

I brush my teeth, pull on some pajamas and crawl into bed myself. Listening one last time to make sure my daughters are really asleep, I lower my sleep mask and try to drift off for a quick nap. It’s 3 p.m. In a mere four hours, I’ll be clocking in for work. As the rest of the country winds down for the night, my work is just beginning.

Welcome to the night shift.

Policewomen, nurses, gas station attendants, health care workers, and doctors — many jobs require clocking in during the wee hours. As a nurse who has worked odd hours, I am all too familiar with the “other” life. And I’ve often felt a little left out by the plenitude of blogs, magazine articles, and websites that talk about working mothers but gloss over those who log different hours than the typical 9 to 5. 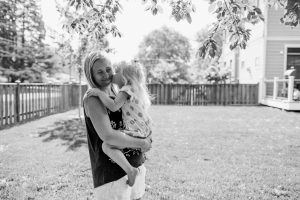 While some professions, like nursing, have “expected” night-shift hours, many women in other professions, such as journalists, graphic designers, and freelancers, are firing up their laptops well after the rest of the world has said good night. A 2011 article by Lisa Belkin on the New York Times’ Motherlode blog cited that upwards of 40 percent of working mothers are working non-traditional hours. After all, what WAHM isn’t familiar with tackling a project after tucking the little ones in for the night? For many mothers, the night shift is the ultimate way to combine work and family life. Only in this case, it’s family on the first shift and work on the second.

After a twelve-hour shift, it’s back to bed by 8:30 the next morning to prepare for the next stretch.

Jen Dohm, a nurse and mother of three active young sons, has been balancing night-shift work with family life for over fourteen years.

“I love that I have the choice to do what I want, or what is best for my family,” Jen says. Typically, Jen works a stretch of three nights in row. For her first night “on,” after a morning routine of seeing kids off to school around 8 a.m. and household chores, Jen tucks into bed for a nap. She gets up around 3 or 4 p.m. and is back on mom duty — helping with homework, running kids to after-school activities, and preparing dinner until heading into work for her 7 p.m. shift. After a twelve-hour shift, it’s back to bed by 8:30 the next morning to prepare for the next stretch. Her schedule on her days off varies — sometimes she may stay up in an attempt to normalize her sleep schedule, or force herself to wake up after a few hours to ensure she’ll be able to hit the hay again that night.

Sleeping during the day is the tricky part. After working all night, “I’ll sleep pretty soundly until about 1 p.m.,” says Jen.  “But then, the tossing and turning starts. I think my body was just not meant to be sleeping at that time of day.” And sometimes the waking hours aren’t much fun either. Trying to stay awake as the rest of the world sleeps leaves Jen with a “sick, exhausted feeling that is hard to describe. Your eyes start closing. You feel sick to your stomach, like you have the flu. Everything is achy.”

Although many night-shift mothers like Jen have trouble sleeping during the day, most of the women I spoke to felt that the benefits of working late outweigh the challenges. “Working nights has a positive effect on my family life because I am able to be there while they’re awake,” Jen says. “I don’t miss out on much after 7 p.m. at night.”

Tara Pringle Jefferson, a writer, blogger, and social media consultant, is another mother working non-traditional hours. After being laid off in 2008, Tara carved a career for herself through her website, The Young Mommy Life. While Tara’s hard work has led to financial and personal success, it has come with a price. With the majority of her day taken up by what Tara calls “mommy duty,” she typically logs most of her working hours in the evening and into the wee hours of the morning. But this schedule can feel like she never truly gets a break: typically her working day begins around 6 a.m. and doesn’t end until around 1 a.m.

Read the rest at Babble…