Today’s guest post comes to us from a mom who discovered that she was pregnant while visiting and working in Germany. I’ve been following Kayla’s blog, Kayla Expects Chaos, since she announced her pregnancy and I have loved watching her journey from   pregnant and alone in a different country to a proud, young mom. Congrats Kayla and thank you SO much for sharing your story with us!! 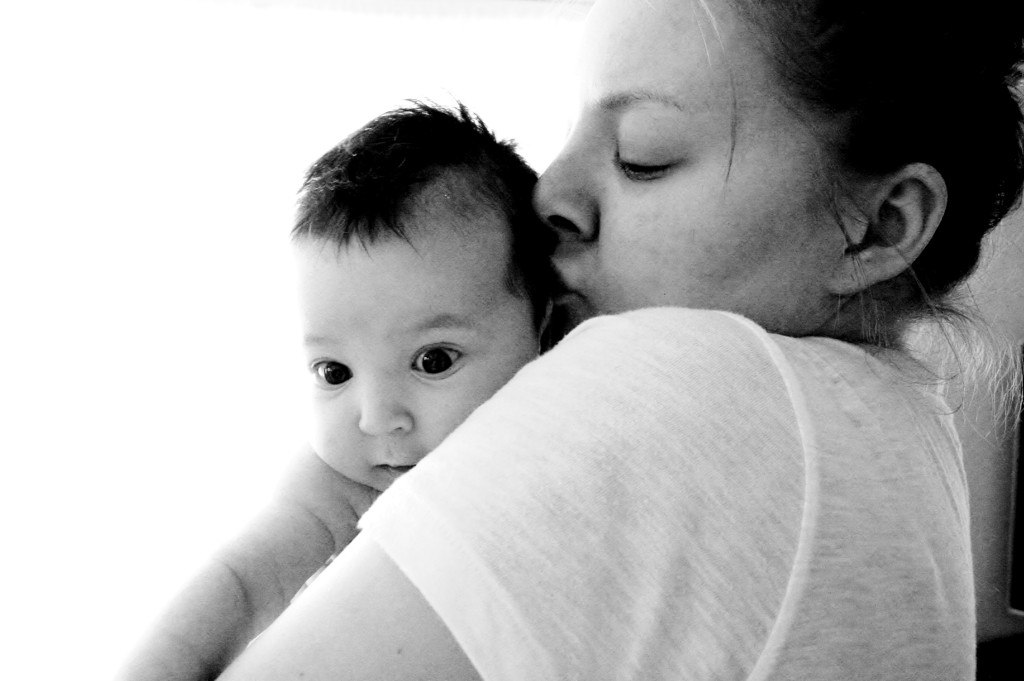 Kayla and her adorable daughter Rooney at 2 months

I was living in Germany with my sister, we were both working crappy resort jobs in order to do some travelling and we were 6 months into a 13 month contract. We had just spent two wonderful weeks with our parents who were visiting from the US and it was our first time seeing them since we had left. A week into the trip I began to suffer from terrible nausea and could barely stomach food. I ruled it heat sickness and tried to enjoy the trip but there was a persistent nagging in my gut about the fact that I had yet to get the period I’d been patiently dreading. When I finally admitted to myself that something was off, I realized that I was 3 weeks late. I had always been cautious and although there had been a couple slip ups, I told myself there was no way I was pregnant. I had never so much as had a scare and I assured myself that this would be my first (and last).

My sister and I bid our parents farewell and at a German drugstore in the Munich airport I bought a pregnancy test. My first attempt at the test was on a train because I was too impatient to wait the hour and a half until we got home. I couldn’t read the instructions (they were in German) but I knew the basics of how pregnancy tests work so I peed on the stick, waited the appropriate time and crossed my fingers for one line. Nothing showed up. I waited a little while longer and then hid the test in my purse and took it to my seat to show my sister. Apparently I’m an idiot and I peed on the protective covering, not the actual stick. I didn’t have any more urine so I waited until we got home.

Attempt number two took place in a dorm bathroom. I locked the door and this time I peed in a cup and then stuck the test into it. Fully prepared to wait the 3 minutes, within 30 seconds there were two very distinct lines. My immediate reaction was panic. All my plans, dreams and goals for the future instantly flashed through my mind, my stomach dropped, my eyes welled with tears and I cursed, repeatedly, a long string of expletives. I had barely closed the door to my dorm room before the words “I’m pregnant” tumbled out. Unplanned, those words have a weight that makes it easy to choke on them and my voice cracked as I said them to my sister, who just stood there staring at me.

My mom was 35 when she had me, so 24 seemed way too young. Plus, I was single. And not just the unmarried single but the, I’m not dating anyone, single. To say that the guy and I were “casually dating” would be a gross exaggeration. The Gods honest truth was that he was a boy I had been inexplicably pining over for months and I was an easy ego boost. It had been one night, when I had over indulged and he was bored. The dorm room setting was a far cry from romantic and the next morning I had (ashamed) tried to slip out unnoticed before he woke up. His work contract ended the week after I found out, so when I finally got the courage to tell him (2 weeks later) he was already back in the US and I had to tell him through email. We disagreed on how to handle things, I knew I was going to keep the baby and he wanted me to “make it disappear”. That was the last time I heard from him.

Acceptance was difficult, I had a list of places I had yet to visit and plans to move to Chicago and attend acting school. When I pictured kids I envisioned myself as 30+ years old with a kickass artistic career, a comfortable bank account and a guy that loved me and would love my kids. And here I was, 3 days from 24, unmarried, broke, working a minimum wage job and about to become a single mom. Needless to say, things were rough. However, I’m happy to say that I’m currently 36 weeks pregnant with a baby girl. There have been good days and bad days and completely irrational, hormonal days but I’ve been blessed with incredible family and friends who have supported me every step.