On Sunday, Ben came in from working outside to find me hunkered down at the kitchen table, typing furiously away on the computer.

“Where are the girls?” he asked.

“Upstairs playing together!” I answered gleefully, barely suppressing an evil laugh. “It’s my dream come true–they are playing by themselves! Without me! Happily!”

“Have you checked on them lately?” he questioned, eyebrows raised.

He muttered a noncommittal reply, sighing as he trudged upstairs to check on them.

Chocolate teddy grahams, crushed and dismembered, scattered across Ada’s princes duvet. Ada, jumping as high as her tree-trunk legs would allow, further crushing the teddy grahams into princess-heaven oblivion.  Shouts of “Yeah! I got one!” filled the air as Ada chucked the surviving teddy pieces at her young sister, who raced around the room like some sort of circus-performing piggy, trying to catch them in her mouth. Unsuccessful in her attempts, Mya, somehow clad in only a diaper, resorted to stuffing as many teddies into her mouth as her cheeks would allow, laughing hysterically as Ada’s teddy assault continued.

Ada tossed her blonde hair over her shoulder and titled her head to the side.

“Oh Dad,” she said pityingly. “It’s ok. Me and Mya are on the party bus. We are having so much fun!”

I swear if I hadn’t birthed them, I wouldn’t know these were my children. 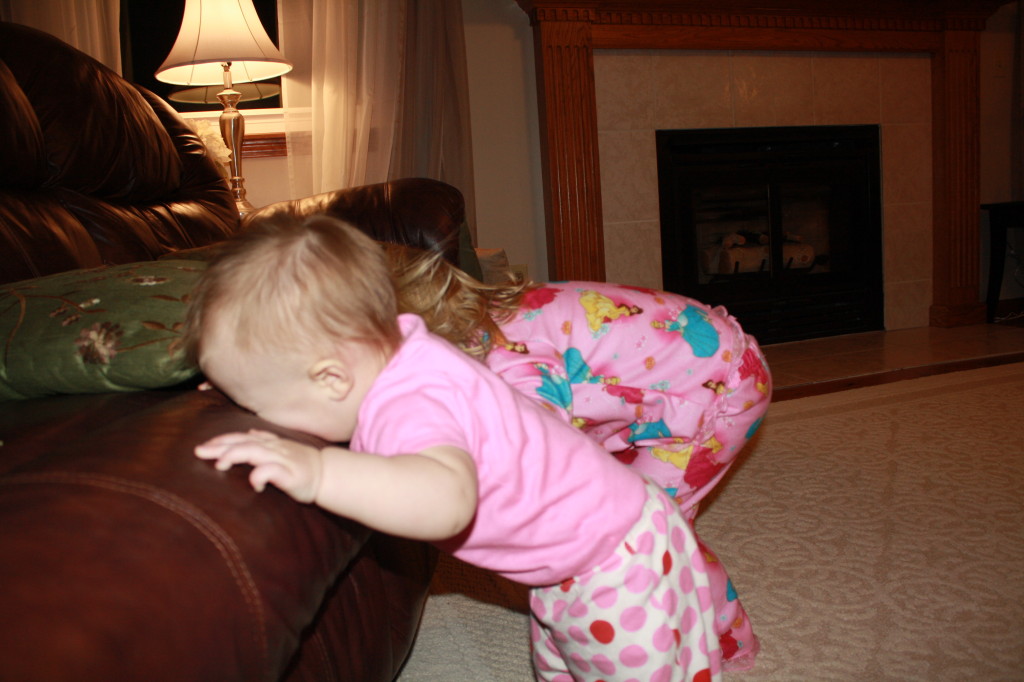 One of their favorite pastimes...smashing their faces onto the couch. Told you they were weird.