On Monday, Ben had the day off for Martin Luther King Jr. Day. It also, by sheer coincidence, of course, (it’s not like I planned it that way or anything…) my day to be the helper and provide the snacks for Ada’s preschool class.

Ben volunteered to take over on preschool duties for the day while Jake napped and I worked. Although I felt wretchedly guilty about the thought of my 200+ pound husband trying to jam himself into the teeny preschool chairs and play with play dough, I also thought it might be really nice for Ada to have her dad there. And it was show and tell day! Bonus!

Because Ben’s a teacher, I enjoyed hearing his commentary after school on the do’s and don’t’s of running a preschool classroom. Because I am a mother of small children, I also enjoyed rolling my eyes at some his observations. Real life = way different than the classroom, amIright?

In one instance, however, we both wondered about an exercise that the teacher did with the class.

After having the kiddos gather `round on the big preschool rug, she held up various pictures of different kids and asked the kids to spot the differences.

One girl had curly hair. One had straight.

One boy was in a wheelchair. One was not.

Can you guess where I’m going with this?

When she held up a picture of a girl with dark skin and one with light skin, the children paused.

“Oh, she has glasses!” one shouted.

“No, that one is wearing a watch!” another one tried.

“Is it because one has a long-sleeved shirt one?” one little boy guessed.

Four or five children shouted out guesses while the teacher shook her head silently.

Not one of them noticed the color of their skin.

Not one of them mentioned it.

Not one of them even saw it.

Until the teacher pointed out.

I don’t know. Maybe we’re overreacting. But I kind of thought it was nice that none of them noticed the color difference. 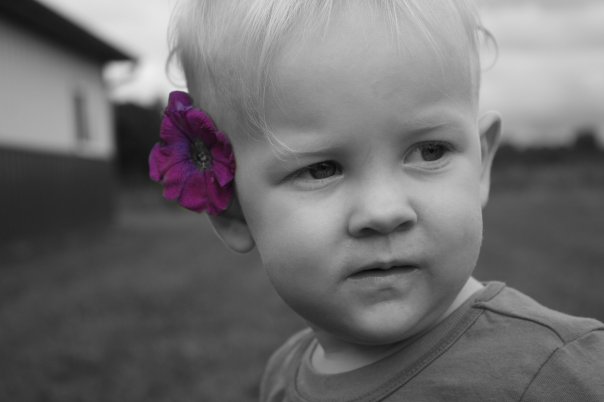 So why would she open their eyes to something they didn’t even see in the first place?

Update on this post: The awesome comments and online conversation I’ve received on this post have helped to point me in the right direction when it comes to talking to kids about race and color. In general, the consensus seems to be that kids definitely do notice color and that not talking about it makes it into an even bigger deal. So, thank you to all who helped point me in the right direction! For a helpful perspective on this issue, please read this great article at She Knows. Also see here for a great list of children’s books to introduce the topic of race and color.