Lately, I’ve been struggling with tantrums with the kiddos. I just feel like they are out of control. Like, as in I-need-a- Super-Nanny intervention out of control.

Ada screams bloody murder, flings things across the room, (the other day she picked up her box fan and hurled it across her room like a ring wrestler. WTH??) even tries to hit me and Ben. Her little sister, watching every move like a silent stalker, picks up on her behavior and is starting to imitate it.

It’s so frustrating because I feel like the world’s worst mother. I’ve tried to hard to take a calm and rational approach with Ada, taking the following approach: 1) calmly stating that her behavior is not acceptable and she will get a time-out if she continues it. 2) following through and putting her in the time-out chair and setting a timer so she knows exactly how long she will be in there.

The problem usually arises in the act of getting to the time-out chair. Usually, her tantrum escalates, and she will either try to hit me on the way, or do something equally appalling, like sit in the chair and throw things at me. At which point, I send her to her room and tell her she can come out when she wants to act like a big girl.

As you can see, I don’t really have a “next step” on the ladder of discipline after my time-out chair. Like if she’s even worse being put in time-out, then what do I do? Things aren’t really working out the way they are going, and I am so frustrated.

Even more so is the fact that I don’t know of anyone else’s kids who act like this. I discussed my problems at work the other day, and the desk clerk said, “I have never yelled at my kids.”

I chuckled a little bit, thinking surely she was joking. And then I saw her face.

“Wait, what? Are you serious? You’ve never yelled at your kids??”

Her face was solemn and deadly serious. “Never,” she repeated emphatically, shaking her braided head for emphasis.

So it was all the more of a moment for rejoicing when yesterday, arriving home from work to the most glorious sunset I have ever seen–seriously, purple and pink rays literally bursting out and illuminating the entire sky–I called Ada out to see it.

She ran out in her little purple striped shirt and princess undies, her Fred Flinstone feet smacking on the pavement.

Stopping in front of the sidewalk, she took one look at the blazing sunset and gasped, her hand (so carefully painted with pink nail polish all by herself earlier that day) clasping over her mouth.

“Oh wow!” she said, turning to me with a serious look on her face.

“Mama, thank you so much for showing this to me,” she said.

No, Ada, thank you for showing me a truly beautiful thing.

Maybe my kids aren’t so bad after all, huh? 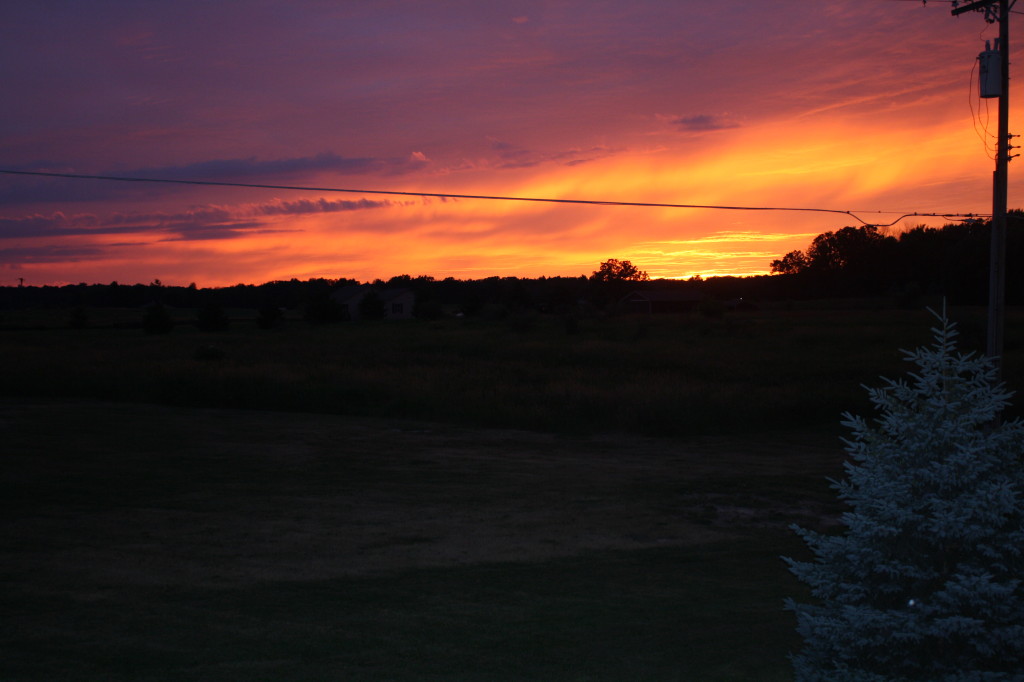