As school looms closer, I am left struggling with the decision about what is best for my five-year-old son. The only boy in a houseful of girls, he’s grown up playing with tractors but also nail polish; he trails behind his older sisters and takes care of his younger sister. He’s sweet and rambunctious—he drives me nuts but melts me with his dimples.

And honestly? I just don’t know what the heck to do with him this fall.

As a work-from-home mom, my kids have always been with me. But if I can be honest, it’s getting ridiculously hard to pull off working with him at home. I have two children who are in full-time school and two who are not, so if my son doesn’t go to school, it’s just him and my three-year-old daughter at home. Which doesn’t sound bad in theory, but in reality?

My son is bored out of his mind. 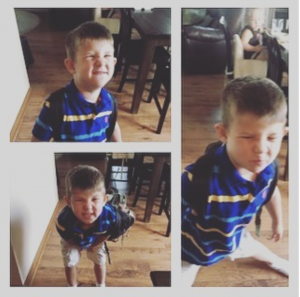 Although he and his sister get along pretty well, they are at very different stages, and they have their limits regarding how long they’ll play with each other. Plus, he’s an active boy that loves nothing more than hanging out on the farm with his grandpa or working on some project with his dad, while my three-year-old girl is very much into playing dress-up. So they enjoy different things and trying to keep him happily entertained and engaged, while spending time with my daughter, while keeping up on my house and chores and cleaning, while working full-time from home is kind of making me crazy.

That being said, the question of putting him into school is starting to feel like it’s more about me than him. And that’s troubling.

When I consider what is best for my son, however, I am genuinely at a loss. He tested into kindergarten and our children go to a very small, private school. With only nine potential children in his class, he would get plenty of one-on-one attention, so honestly, I think he would be fine at school. It might even be more beneficial to have that small, one-on-one setting than it would be to wait a year and send him to a larger, public school environment.

I know that just because my son is old enough for kindergarten, it doesn’t mean he’s necessarily ready. But on the flip side, is it so terrible to send him to school when he’s bored and driving me crazy at home?

Read the rest at BigCityMoms