After a few sore days post-birth, I was feeling pretty good.

I had more energy than I had ever had with the girls, I could actually get through the day without a nap, and things were going pretty smoothly with all three kiddos. I even had help for the first whole week this time, with friends taking the girls every day in some capacity for me. (Granted, I was still taking care of a newborn, but as us moms of more than one know, that’s a piece of cake, right?) 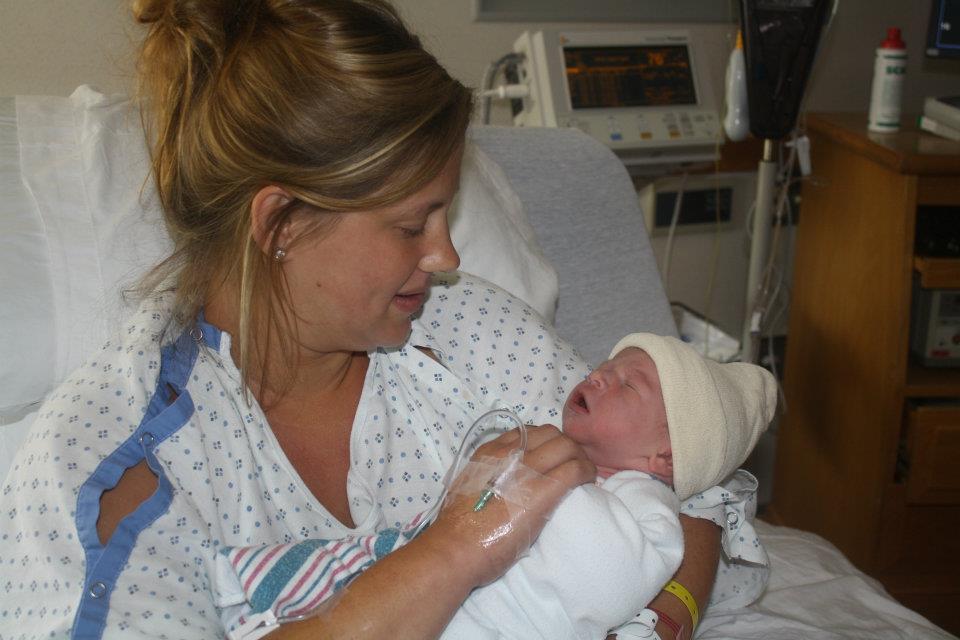 Me and my boy.

So, bright and early Monday morning when I was on my own, I got right back into the swing of things. All three, cleaning house, prepping dinner, even writing an article or two. Come the weekend, we hit a 3-day stretch of parties, starting with my lovely cousin’s wedding on Friday, a bridal shower Saturday, and another Sunday.

After coming home from the bridal shower on Sunday, Jake and I immediately snuggled down on the couch for a little snooze. I was exhausted beyond belief, like that bone tiredness that almost hurts. And despite the 100 degree heat, I was suddenly freezing. We lay there for a while, in which time I begged Ben to bring me blanket after blanket. Finally, when I started shivering uncontrollably I realized that I wasn’t just cold…

I was getting another stinken’ fever.

It’s like this–two days after I gave birth to Ada, I wound up in the hospital again, delirious with a massive kidney infection from the group beta strep bacteria that some pregnant women have. It’s not supposed to affect the mother, but can be deadly to the baby; for whatever reason, my body doesn’t deal well with the bacteria. I was hospitalized for three days, unable to see Ada or feed her. It was awful. And then a week after getting out, I came down with another fever and had to be hospitalized again for what turned out to be mastitis. Again, not so fun.

With Mya, I tested positive for the bacteria, but escaped unscathed in my recovery.

GBS-positive again this time around, I was worried about getting sick, but felt certain that having help for a week and feeling so good meant I was ok. Three parties and perhaps one too many cranberry-and-vodkas later, I was obviously wrong.

Ben tried for almost two hours to get ahold of the doctor for me, who advised us to head to the ER. Again.

Luckily for me, my aunt was working that night and helped me convince the doctor to one dose of IV antibiotics and a discharge on orals. I did not want a repeat episode of last time.

Now I feel like I’m back to square one. I feel ok, run-down more than usual, but ok. But I find myself wondering how much is too much? And when can I claim that I’m back to normal?

I’m sure you guys are like me–it feels like I’m a big bag of lazy bones to do nothing at my house and it drives me crazy not to do the “usual” around here. I want to be doing fun stuff with the girls, I want to go blueberry picking, I want to feel good enough to go for a walk again. It’s so frustrating this in-between, no-man’s land of recovering and not.

So I’m wondering now–is there a “normal” recovery time after having a baby? Obviously, things are different for c-section v. vaginal, but what do you think? What’s your routine after a baby? Or for those of you first-timers, what do you plan on doing?

When should a mom be considered “recovered?”