As I’ve already shared, after I had Ada I sank into a depression. Although I hesitated naming “it” in my original post, after encountering some brave mommy bloggers who shared their stories, like Katie, I know it’s ok to call it for what it was–

It’s interesting now, to look back at what I wrote:

“What I do know is that whatever it was, I wasn’t particularly basking in the new mom glow during the first few months of Ada’s life.  I felt so isolated and alone.  We lived in a small apartment in the small town where my husband grew up and I didn’t really go anywhere.  There were days I dreaded waking up in the morning…how would I fill all those hours?  I felt certain that Ada was bored out of her mind with me, because I was bored with myself.  As anyone who has struggled with similar feelings knows, the way you feel only makes you feel worse…as in, you know it’s irrational to feel that way, you know you have so much to be grateful for, health, a beautiful baby, sunshine, etc., etc., so the fact that you aren’t feeling happy makes you feel like a horrible human being.  And so the cycle continues.”

Knowing what I know now, and what I’ve learned as a labor and delivery nurse, it was pretty textbook stuff. And more importantly–or at least it would have been important to me had I realized it at the time–I was one of many, many women. Postpartum depression is so common, and it can take many forms. Usually, it doesn’t kick in until after 3-4 weeks from giving birth, when your hormones start to balance out again. But the kicker is, the depression can then swoop in at anytime, right up until a year or so after birth.

Because I never considered my troubles as an “official” thing, but more of a result of all the stuff I had going on at the time, I’m not sure what a doctor would have prescribed to help me. Drugs? Therapy? Exercise? Who knows.

But I can tell you what worked.

Strangely enough, for me, the cure to my postpartum depression was going back to school.

For me, part of my depression stemmed from the fact that I just felt like I was drifting…after having Ada my life had shifted so dramatically from what I thought I would be doing after college graduation that I felt like I just couldn’t find my footing.

Working a job I hated to support us, feeling like I didn’t even recognize myself anymore, not knowing how to navigate my new life…I think I just lost sight of who I was. 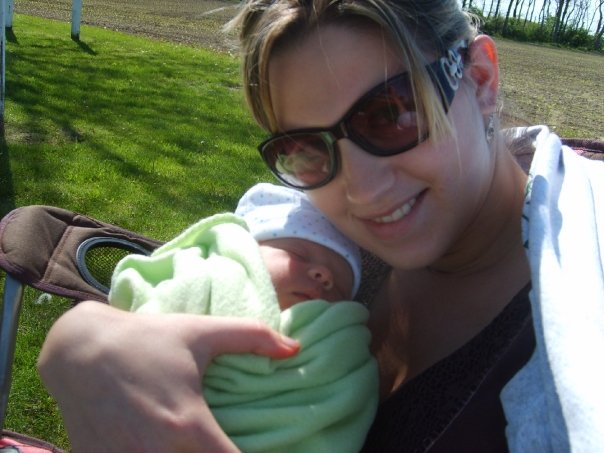 Me with Ada shortly after she was born.

Going through the act of applying for and being accepted to graduate school invigorated me. It made me feel like I was still worthwhile. I wasn’t just that girl who got pregnant–I still had brains left. I could still chase my dreams and become what I wanted.

The three hour drive to class once a week was actually refreshing to me–time to think and reflect, quietness for my soul. Getting lost in the swell of campus again invigorated me and helped to find my focus again.It felt good to be someone besides “mom” for even a few short hours.

Although I haven’t finished my graduate courses (I stopped classes right after Mya was born), I’ve realized the degree wasn’t my real goal.

My real goal was finding myself again. And although it’s unfortunate that it cost me an additional student loan to do that, it has definitely been some of the best money I’ve ever spent. (Although I do regret a few of the drive-through purchases made on the way home. Why is a McChicken so inviting at 10 o’clock at night??)

So what about you guys? Did anyone else experience postpartum depression in any form? How did you get through it? I find myself anxiously checking my emotions these days, making sure I’m staying “normal.” It seems like a daily, slipper slope, but so far, so good!