The relentless heat beat down around me, sweat trickling down my stretch-marked belly. The harsh words of my sister-turned-evil-labor-coach drilled into my head as I summoned the strength to go on.

Determinedly, I pumped my arms, willing my body to continue its massive waddle up the hill in the 100 degree heat.

I was desperate to have this baby. While Ben worked in his workshop, I toiled away at my parents’ house, trying everything I could think of to put myself into labor. I did squats at their kitchen bar, lunges with my barely-100-pound sister, sprints up and down the stairs. And in the final bout of pregnancy-induced-insanity, I begged my sister to go for a walk with me in the heat of the afternoon. Uphill both ways. Where she turned into a diabolical trainer from hell, convincing me I just may have the baby in the brush pile on the side of the road.

And after all that?

So I gave up, flopping my giant self into the pool for a good swim with the girls and resigning myself to being pregnant forever. When my cousin texted me with an invite for a movie-and-pizza night, I jumped at the chance for a fun evening and anything, anything to take my mind off what was clearly not baby time.

After eating an entire pizza and pan of brownies by myself and entertaining ourselves watching our kids dance around the living room, (is that what happens when you’re a parent? I can seriously watch my kids play for hours…) we got the kids home and tucked into bed a little after midnight.

As you can imagine, I was utterly and completely exhausted.

Which is precisely why I then went into labor approximately two hours later.

I woke up around 2:30 with that first twinge of a contraction, and after two other babies, I knew it was time. So after all my complaining and whining, do you know what my first thought was?

I pretended I could continue sleeping, but after a few more contractions, I gave up and got up. I hopped in the shower and then proceeded to clean my entire house. After all, who wants to come up to a messy house with a newborn, right?

A little after 5 am, I wandered into the bedroom to double-check my hospital bag and tidy up our room, waking Ben up in the process.

Classic. Although in his defense, he really was half asleep still.

I spent the morning alternating between walking around and sitting on my big exercise ball, trying to wait until my contractions got a little closer together. Around 8, with contractions down to about 6 minutes apart, I finally called my parents over and after telling the girls the big news and giving kisses all around, we were off.

And of course, as soon as I got in the car, the contractions pilfered off to about 10 minutes apart.

I made Ben drive around for a little bit, buy me some chapstick, and ok, ok, snuck a few bites of an Egg McMuffin.

I finally made my way into my workplace around 10 and was admitted by one of my favorite nurses (yay!), followed by another of my favorite nurses (yay!). My doctor, being the cool doctor that she is, let me spend the morning doing my thing, walking around and rocking in the rocking chair. Around noon, I was dilated to about 5, so she broke my water to get things really moving.

And then it was decision time.

Epidural or no epidural?

After the whole water-breaking thing, labor tends start in hard and fast, especially for third time mommas. The doctor predicted I would be pushing by 2:30, so she urged me to make my decision sooner rather than later.

After a few of those hard and fast contractions, I decided to go for the epidural.

And it was good.

Although he missed the first time, and I thought I literally might give birth in the middle of the process, once the medicine kicked in, I felt fantastic. The relief on Ben’s face was too funny–he was practically prancing around the room, laughing and joking with me. “This is so great!” he shouted. “I feel so much better!”

Apparently seeing your wife in a lot of pain is hard on a husband. Who knew?  Honestly, with the other two, I barely even realized Ben was there, I was so focused on my labor. This time around, it was kind of fun to be aware of what was happening and be with him.

The epidural took about 90% of the pain of the contractions away for me, and I still felt all the pressure of his head moving down. What I did not feel, however, was the urge to push. What had once been an uncontrollable urge to getthatbabyoutnow with the girls, actually never materialized this time around. In fact, a little after 3 pm, the doc came in again and checked me.

And the rest, as they say, is history. I gave a practice push, causing the doctor to panic a bit, as apparently it was quite an effective push. (Hey, I’ve done this before, what can I say?) 3 or 4 pushes later, I found out the difference between delivering a boy vs. girls–the shoulders. Ouch. 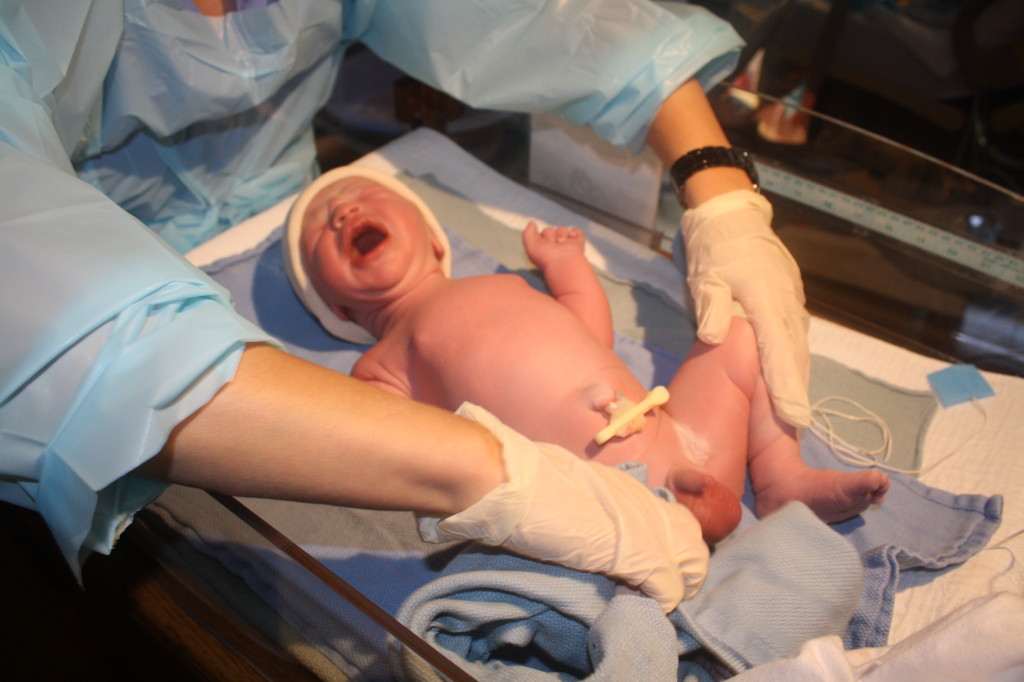 And I had my moment of justification towards my doctor, who predicted my man to only weigh about 7 1/2 pounds. Ha! My mom arrived with the girls shortly after he was born, which was the sweetest thing to see. These girls are in love with their brother. 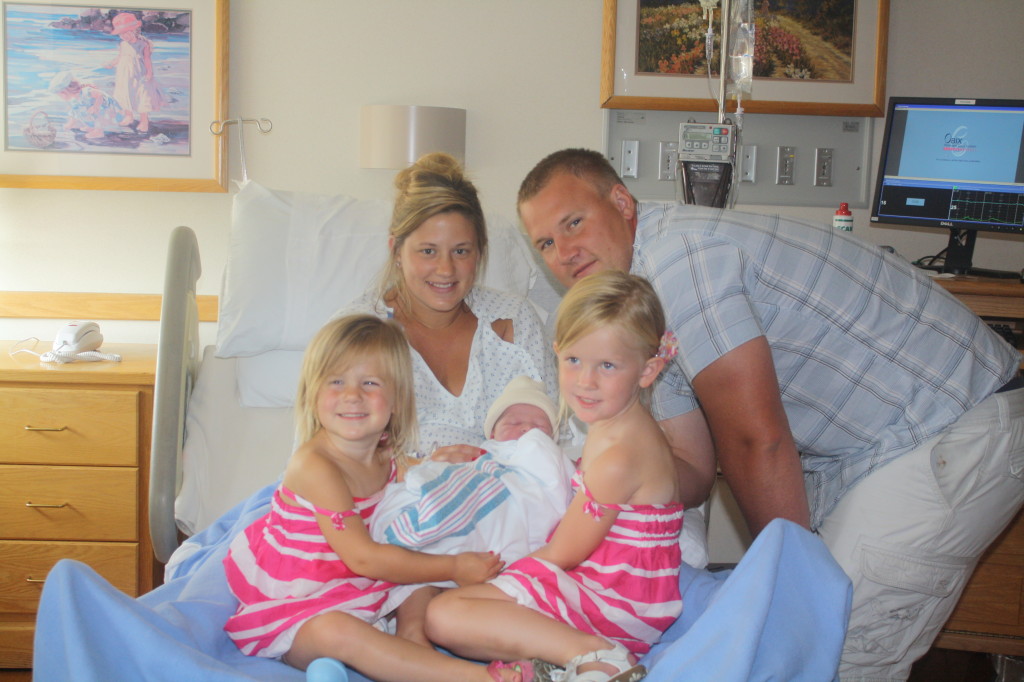 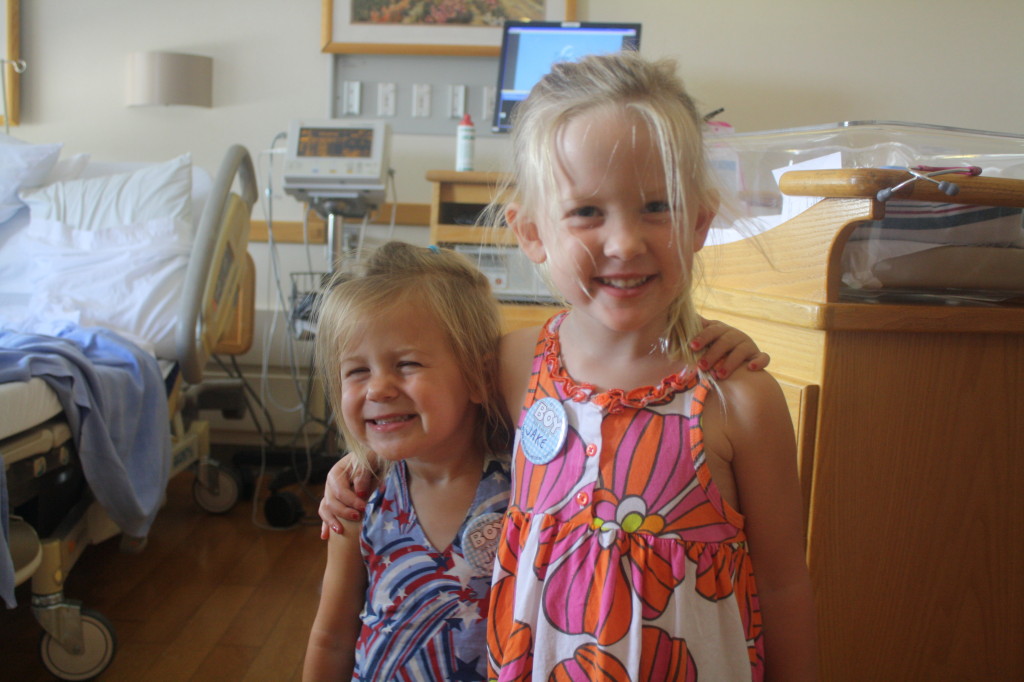 All in all, it was an awesome birth experience. I felt safe in the hands of nurses I knew I could trust and I was happy with how my labor went. I’m glad I labored naturally in the morning and was able to use the epidural for the last few hours. I think it worked out perfectly.

Now that we’re home, I have to laugh at the difference being a third-time momma makes. It may sound crazy, but I can’t believe how relaxed I feel. I am so grateful for the help I’ve received–Ben taking two days off, my mom taking the girls to the water park, my very brave and very pregnant sister-in-law volunteering for a park date, and my mother-in-law giving me a whole day off today.

But there is definitely something that has changed in me as a mother. Now that I am finally feeling physically a little better especially, but mostly due to the fact that the third around, you just can’t help but laugh. Yes, things are crazy, but they are also temporary. Yes, we are crazy to have 3 kids in 4 1/2 years, but so what? Life is short, and what better way to fill it than with new baby smells and snuggles and joy and wonder and the love of two big sisters? 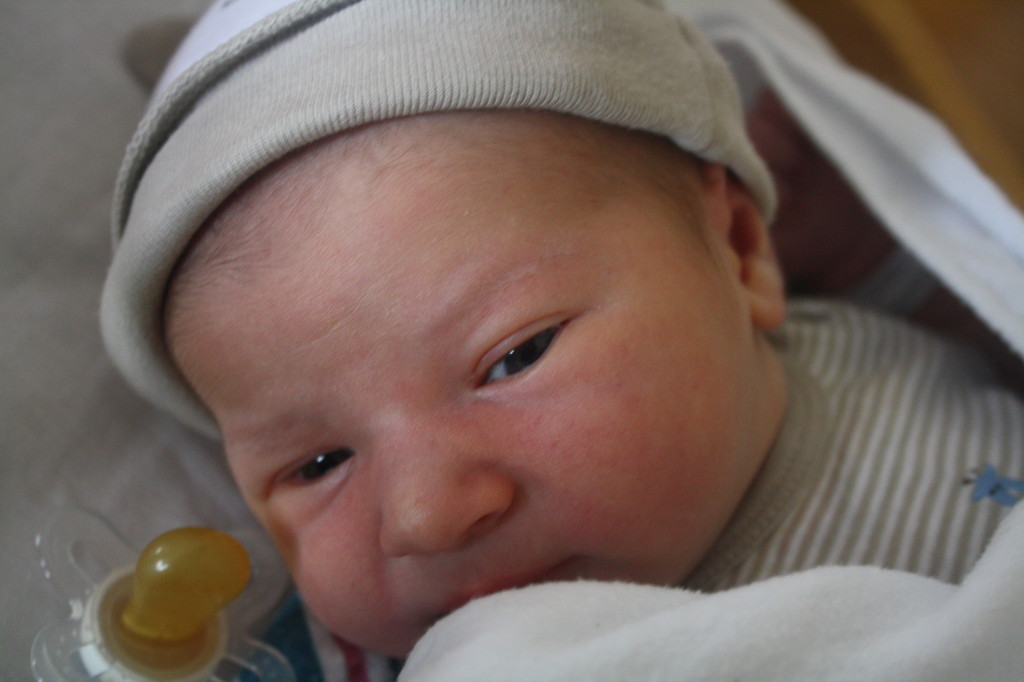 Oh, and wine. It’s good to have that back.