A few months ago, I shared a pretty lofty goal to donate 1,000 copies of my book, Tiny Blue Lines, to the annual Heartbeat, Intl. conference this spring. (You can read more about the project here.)

Although I thought it would be lovely, I never really expected to raise enough to send that many copies of my book there (let’s be real, I have barely sold that many!) but I felt like it was a worthwhile enough of of a project to put it totally in God’s hands and see what happened. I hated the thought of asking for money because every day I pass over so many more worthwhile fundraising efforts for children needing cancer treatments or the heartbreaking expense of parents planning for their baby’s funeral, so really, I just wanted to kind of set this project down and back away slowly.

The truth is, you never know who can benefit from the message that life matters and that unplanned pregnancy is not a dead end and when it comes right down to it, this book really could save lives–but again, I really felt like it wasn’t up to me to ask for money. So I haven’t pushed this project, but have been lucky to have some great people in my corner and to date, I’ve raised a little over $1,000 dollars! 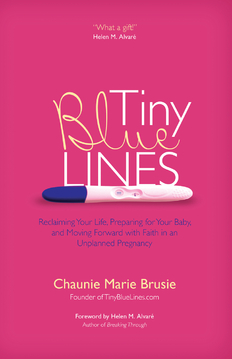 Last week, I called Heartbeat, Intl. to update them on my project and they were gracious enough to help me work out a new plan, since obviously, I will not be sending 1,000 copies of my book as I originally hoped—but I have to say, I’m so happy with the new plan:

Instead of providing a copy of the book to every conference attendee, I will now be donating the book to a client services workshop at the conference, which means 1) the book will be getting in the hands of pregnancy center workers who are actively seeking new resources (like mine!) to help with their ministries and 2) I can send as many or as few as books as I am able to raise money to purchase, so I feel a huge sense of relief there.

Honestly, as these things usually go, I feel like everything worked out perfectly and it’s my hope to now send between 100 and 200 books to the workshop by the end of March.

I just wanted to seriously thank everyone who took the time to donate and share about the book project. I’m so very thankful and I really and truly hope that if there are young moms out there who needs the message of hope and inspiration that I found from other women in my book, that Tiny Blue Lines will find its way into their hands.

Some press coverage on my fundraising efforts:

I’m still accepting donations for the book project, so if you feel led to sponsor a pregnancy center to receive Tiny Blue Lines, you can do so right here. Thank you!