I read this post yesterday by my writing idol, Meagan Francis, and I found myself nodding in agreement at the computer while I ignored my still-awake children giggling upstairs.

Yes! I thought. Kids should play outside!

Yes! I thought. Nothing wrong with kicking them out!

Yes! I thought. I should be able to sit back with a nice cold drink while they run around!

As I’ve written about before, I am a believer in letting kids be kids, whether that means kicking them outside or teaching them a little independence in play so mama can get some work done.

And I have to admit, I’ve really been struggling with this one.

Take last week, for example. We returned home after a full morning of library story time, dropping lunch off to Ben, picking up some preschool papers, and grocery shopping. We still had a little time to kill before lunch, so out to the swing set we went.

And I, already exhausted and feet swelling bigger than my stomach, decided to take a stand. I pushed them on the swings for a little bit, “ran” after them playing soccer until my belly started to ache, and played with them on the slide.

I picked up the free People magazine (Is She or Isn’t She? Princess Kate Baby News!) I had gotten from the library and pointed towards the bench under our tree. I told myself I had every right to to do this. I am the mother, for cryin’ out loud. I am 7 months pregnant, and I look like I’m 10. I can sit down for a few minutes while they play. Nothing.wrong.with.that.

“Ok, girls, mama’s going to go sit down for a while. You guys stay and play.”

I turned my back, walked the short 10 steps to the bench and settled in with my magazine. It took all of 0.2 seconds before they were both there, climbing over top of me, clamoring for me to come back, ripping pages out of the magazines.

“Why are you over here? You have a whole swing set, a sandbox, balls to kick. GO PLAY!!!” I cried in exasperation.

The clingy whines have continued. Yesterday I had to embark on a major house clean (because, don’t ya know, I had worked a measly 8 hours the day before, somehow resulting in a bomb going off in our house. Seriously, how does the house go to pieces after me working ONE day?? Anyone else notice this??) and the girls were driving me crazy. Instead of just playing somewhere, they followed me around room to room, basically parking themselves at my feet and bickering. I spent more time breaking up fights, peeling them off of my legs and each other, and “encouraging” them to go and play than I did cleaning.

What’s even more frustrating is that they only do this for me. Never, never do they act like this when Ben’s home or alone with them. They will play happily for hours in close proximity but out of his hair, a picture of perfect angels, completely making me look like a horrible mother when I try to tell Ben what’s it like for me.

So naturally, I’m wondering if anyone else has encountered these issues. Do you send your kids outside to play by themselves? And if so, at what ages do you think it’s “safe?” Mine are almost 4 and 2, and although we live on a dirt road on 5 acres, our house is close the road on two sides, so I worry about them…

What do you think? Is it time to reclaim “adult time” and kick the kids outside? 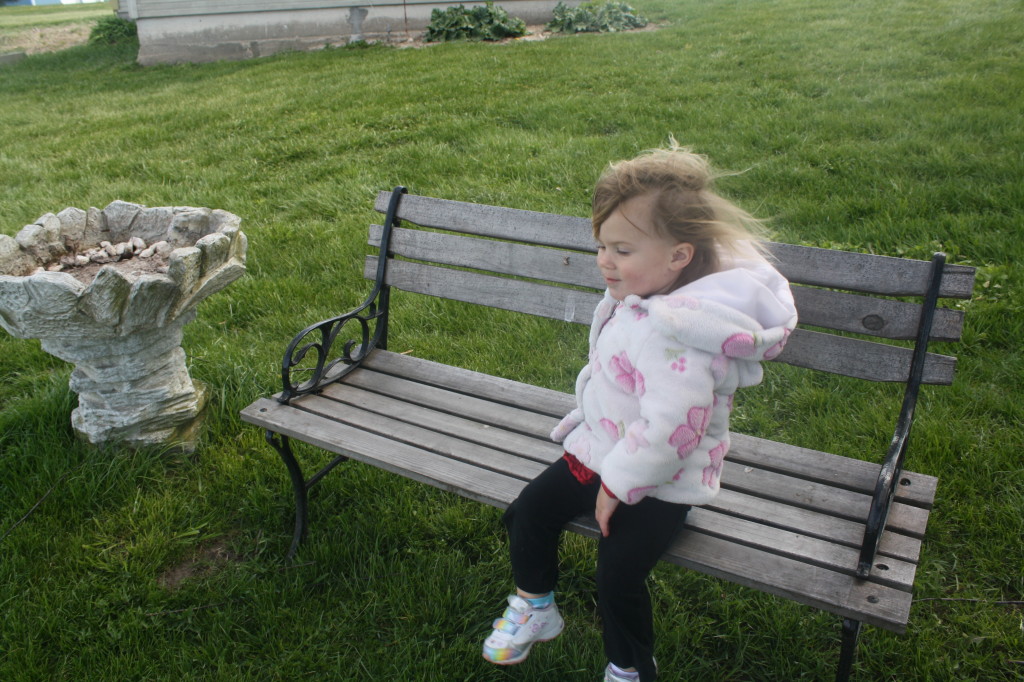 Look at her. Smugly taking over my bench...