When I was dating Ben, I was easily amused by visits to his grandparents’ house.

“Mother, could you please pass the butter?”

“Mother, fetch me some water.”

We would sit around the table with his elderly grandparents, the epitome of what grandparents should be–he, a begrudging old man fondly dubbed “Grumpa,” and she, a saint of a woman who would literally never say a bad word about anyone. When I was pregnant with my first daughter, she asked me how my “condition” was. I stared at her, confused, and started rambling about my slight cold, not realizing she meant my pregnancy…she is just that  genteel.

I remember watching them, a smile on my face, pondering how funny it was that even after all of these years of children out of the house, they still called each other by their roles as parents.

Part of me even wondered if that was healthy. I would shake my head in fond amusement at their lively conversations, sure that my marriage would be different, sure that I would always remember my husband for who he was without children, sure that I would never embarrass him in public by calling him “Daddy” in the store.

This morning I called Ben “Daddy” over breakfast.

This afternoon I called him “Daddy” as we laid kids down for a nap.

And I know, with certainty, that I have called him “Daddy” at the store within the last week alone, no children even in sight.

I’m really not sure where I went wrong. Maybe it had something to do with the pride in seeing him as a Daddy for the first time with Ada. My heart literally felt like it could burst just watching him hold her…I loved that we were “Daddy” and “Mama” together.

I’m sure another part of it is just plain convenience. The number of times I will say, “Go ask your Dad,” or “Wait until Daddy gets home” are just a normal part of our daily routine. I get used to calling him by his parent role for the girls’ sake…and it just kind of sticks.

I guess I can’t say with certainty anymore that I won’t be calling Ben “Dad” long after our kids have flown the nest.

Because after all, you can’t really ask for more in life than sharing some bread and butter with the man who has been by your side, raising daughters and sons as only a father can. 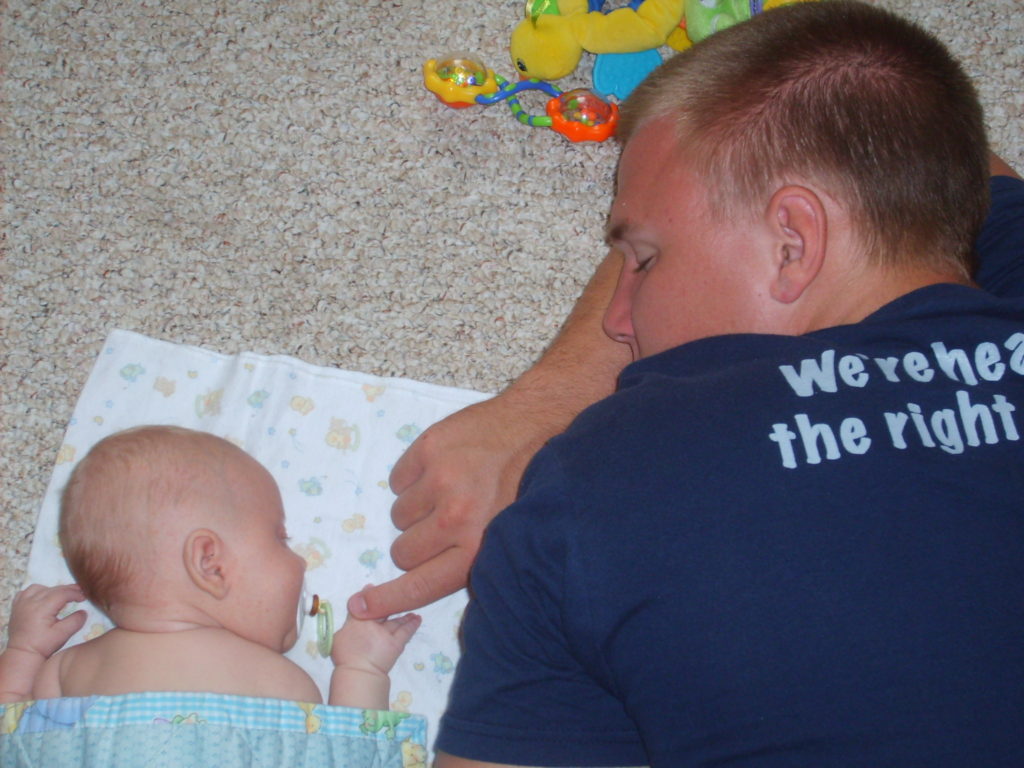 One of my favorite pictures of all time. Daddy and Ada.