Last night, after I had collapsed into bed after an especially grueling week of sick children (Ever heard of hand, mouth and foot disease? If not, then good for you and I hope you keep it that way because open sores on your toddler’s throat are never a good time), it hit me that my oldest daughter’s childhood is coming to a close.

At 8 years old, she’s rounding the corner on double digits and then, incredibly, in roughly the same amount of time that we have known her, she will be heading off to college. Such a thing seems unthinkable, really, and the mere realization of it sent me into one of those panics that moms get at night when they really need to sleep but can’t seem to do it.

It hit me, all at once, how her childhood had essentially flown by, and I’m just not sure that I did a good enough job. 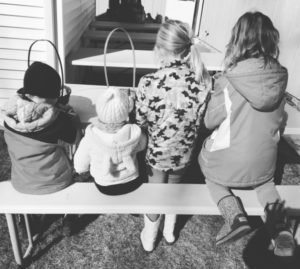 You see, if we’re being honest here, just between us parents, I made a lot of typical first-time parent mistakes. But mostly, I feel like I struggled with never feeling like I was enough.

I wasn’t imaginative enough or magical enough or involved enough.

I didn’t “have it all” enough or set an example enough or ever do enough.

I feel like I focused the majority of my introduction as a parent generally feeling like I was constantly running behind and trying to play catch-up to this standard of a “real” mom I had playing in my head like a static-filled reel.

I want to take that anxious first-time mom—the one who researched what first foods to give her daughter, never let her watch TV and dragged her to a million classes while her husband rolled his eyes—and tell her just one thing:

Read the rest at mom.me