As you may or may not know, I am inundated with apples this year. We are literally drowning in apples. I’m pretty sure I’m starting to annoy a lot of people by begging them to take apples from us. Yesterday, while playing with the girls outside, I noticed a strange man in our front yard scooping up apples as fast as he could into his arms.

And I didn’t even care. I had no idea who he was, but I went out and thanked him because by golly, I want to see these apples get used!

Which brings me to today’s apple-of-the-day recipe, a delicious bistro apple tart. For some reason, everything sounds better when you throw the word ‘bistro’ in front of it, doesn’t it? 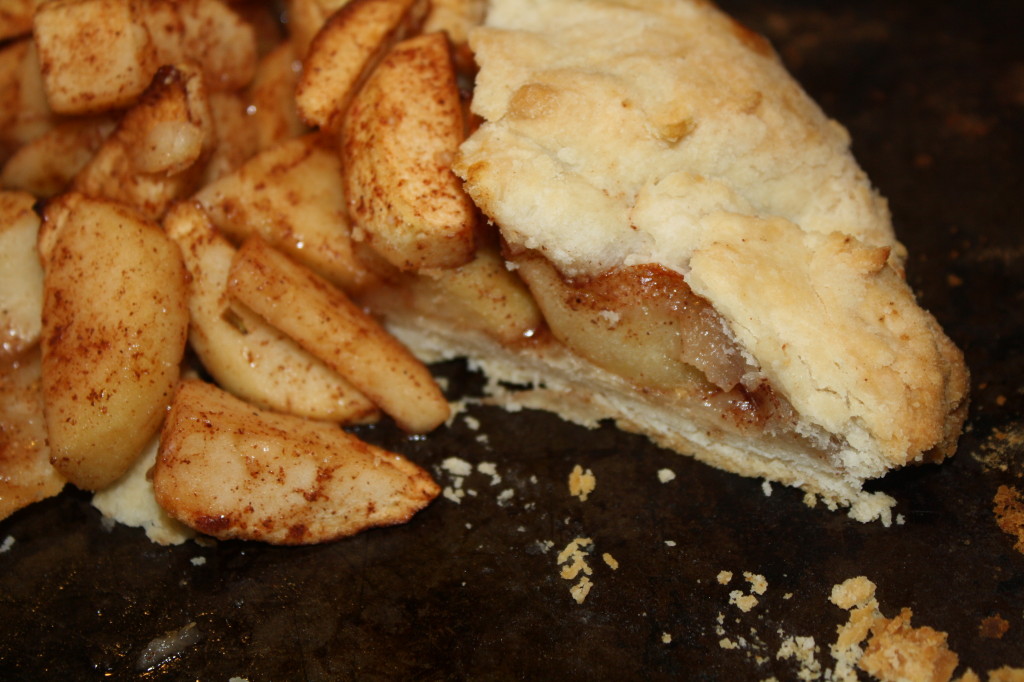 The tart was so delicious I forgot to take a picture before we dug in. Hopefully you can get the gist of it.

Mix the sugar and cinnamon, then add the apples to coat. Crazy hard, I know. You’ll use the butta later.

Stir together flour and salt, then cut in shortening with a pastry blender until the flour pieces into pea-sized bits. Sprinkle one tablespoon of the cold water at a time over the flour, gently tossing with a fork as you go until all the flour is moistened.

Shape the dough into a ball on a floured surface, then roll out into a circle with a rolling pin. You can roll out the dough right onto the pan you are going to use, or use the ol’ wrap-the-dough-around-the-pin method to transfer the dough onto your baking sheet.

Add all the apples to the middle of the dough circle and then throw in some pats of butter into the apple mixture, just for good measure. Fold your dough up and over the apples, leaving a good chunk of the middle exposed.

Bake at 425 degrees for about 20 minutes. Delicious served warm with vanilla ice cream or by itself with a little bit of whipped cream.