If you had asked me even a few months ago what I thought about the whole “having it all” story for women, I would have had a quite strong answer for you.

Well, hell yes, women can have it all! Just look at men–no one expects them to worry about their children and work and the house and clean and cook. No one wonders how they “do it all.” No one writes books about balancing work and fatherhood. People applaud when they take their children out in public, for cryin` out loud. And they don’t even have to change the toilet paper roll! We can totally be like that too. 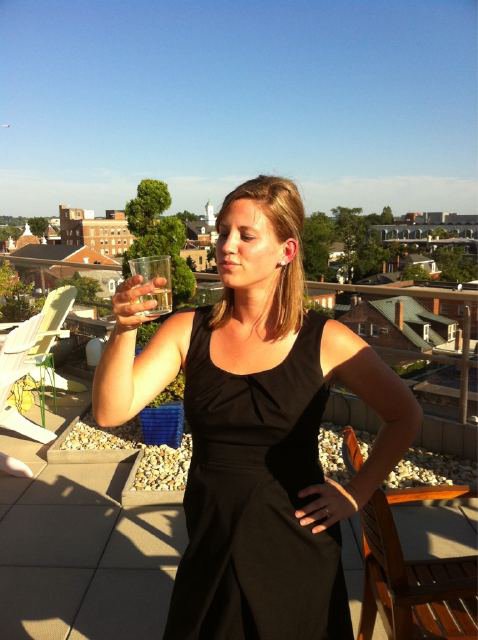 Me at work with my former job for Feminists for Life. That’s how I roll.

I will admit that I have spent a lot of time in my life and in my marriage silently counting up points against my husband.

Well how nice for him that he can just go to work and know everything else is taken care of. Must be great to not have to plan for a month just to work for an hour! Sure he mows the lawn, but he gets to do that child-free! I have to do everything with these kids literally attached to me! Hmpphh.

Or like last week at work, when I got mandated to stay over my shift. (Do you have a job that they make it illegal to leave? Nursing is awesome!) Jake still won’t take a bottle and my mom called me panicked and I could hear Jacob screaming in the background because he was starving and my patient and her baby at the hospital wasn’t doing so hot and no one could relieve me and I burst into tears because I felt torn in 10,000 directions.

No, that wouldn’t happen to a man.

I’ve spent a lot of time reading and writing and researching about women and work and “doing it all.” Just leave poor Marissa Mayer alone, already, ok? I’ve compared and contrasted and hemmed and hawed about how it’s not fair and believed that if we talked about it more, wrote about it more, advocated about it more, things could change. But now?

Five years into my marriage, four years into parenthood, I’m starting to think just a teensy bit different. I hope my feminist sisters won’t hate me for what I’m about to say, but I’m just going to say it anyways.

I’m sick of comparing myself to men.

And I’m starting to think that maybe, just maybe, things are a bit different between the sexes. Maybe Ben’s mind really doesn’t work like mine and he really can’t remember when we are about to run out of  dish soap or realize that a small child is about to poop in the corner and isn’t wearing a diaper. Maybe some of the stress I have created about childcare and work is partly my own doing–I refused help with babysitting while Ada was a baby and I was working nights just because I felt guilty. No one made me do that.

In a way, it may look like I’m giving up.

But this is what I have found.

Constantly comparing my life to my husband’s has only served to make me exhausted and resentful. And instead of wishing myself a walk in a man’s shoes, I find myself leaning towards accepting the shoes I happen to be wearing right now–which is a nice mix of barefoot, heels, and hospital shoes.

And while I can certainly take a few lessons from the menfolk, (no guilt, more ice cream) I don’t want to join them.

I want to carve my own path.

One that combines motherhood and work and passions and accepts that it’s not always as glamorous as this post aspires to. One that recognizes that omg–my husband and I are a bit different, but that’s ok. We can make this work. You wouldn’t see a man being this awesome. Via Pinterest.

It’s about recognizing my own strengths and weaknesses and not buying into any idea of what a mother or woman is “supposed” to do. For me, it’s more about realizing that the things I have previously viewed negatively, like the fact that so much of my work is based around the house, that breastfeeding literally is a tether sometimes, that we think differently about the kids, can actually be things I can re-think in a positive way.

The truth is, I want to accept who I am as a woman and a mother.

I like to organize things.
I like budgeting and planning our meals.
I am proud of being the one who remembers when we’re almost out of vanilla extract.
I’m ok with doing the majority of the household chores, because I am the one here the majority of the time.
Working at home as a writer and being a mom isn’t always pretty. But I love it.
I am going to want to run away from my kids sometimes.
I am going to escape to my treadmill without guilt.
I will miss my kids when I’m at work at the hospital. That’s just the way it is.
I am not limited by my motherhood, but I am defined by it.

It’s not necessarily the way a man would view things.

But it’s how I am going to do things. Without apologies. And maybe some red lipstick.